Being the most significant archeological excavations of the 20th century and a UNESCO World Heritage Site, the Terracotta Army is no doubt a must-see for every visitor to Xi'an.

Originally the ancient funerary project for Emperor Qin Shi Huang, the Terracotta Warriors China are now displayed in a live museum built on the site, officially named Emperor Qinshihuang's Mausoleum Site Museum, showing the life stories of the emperor and the once-powerful Qin Empire (221 – 207BC) in those days of pomp and vigor.

1 What is the terracotta army?

The Terracotta Army was constructed to accompany the tomb of China's First Emperor as an afterlife guard. There are thousands of detailed life-size terracotta soldier models represent the guard troops of the first emperor — Qin Shihuang. They were molded in parts, fired, then assembled and painted.

2 Why was the terracotta army built?

There are three popular theories about why the Terracotta Army was made:

3 Where is the terracotta army?

4 How big is the terracotta army?

For now, we know about 8,000 terracotta figures of soldiers and horses, but less than 2,000 are on display.

All soldiers and horses face east in a rectangular array, each one either armed long spear, dragger or halberd. The vanguard appears to be three rows of infantry who stand at the easternmost end of the army. Close behind is the main force of armored soldiers holding weapons, accompanied by 38 horse-driven chariots.

On the southern, northern, and western side there stand one row of figures serving as the army's defense wing. Standing in front of such a grand ancient army array, one would feel the ground shake to the footsteps of the advancing soldiers.

5 Why so unique terracotta army?

Every figure differs in facial features and expression, clothing, hairstyle, and gestures, providing abundant and detailed artifacts for the study of the military, cultural, and economic history of that period.

6 How the Terracotta Warriors Made?

According to National Geographic, some have suspected that a single artisan-produced each warrior; others hold that the individualized faces were achieved by attaching a unique mix of pre-determined ears, noses, mouths, etc. to the heads, a la Mr. Potato Head.

One recent theory suggests that they were inspired by Greek sculpture techniques they learned from travelers on the Silk Road, according to New Historian.

Archeologists estimate that over 700,000 craftsmen worked on the project for several years. The bodies of the soldiers were made in an assembly line fashion. There were molds for the legs, arms, torsos, and heads. These pieces were then assembled together and custom features such as ears, mustaches, hair, and weapons were added later.

The tomb is most famous for its large rows of soldiers, but there were plenty of other statues to accompany Emperor Qin in the afterlife. There were 150 life-size cavalry horses and 130 chariots with 520 horses buried with the army. In other areas of the tomb, figures of government officials and entertainers have been found.

Terracotta musicians, acrobats, and concubines have also been found in recent pits as well as some birds, such as waterfowl, cranes, and ducks. It is believed that Emperor Qin wanted exactly the same grand services and treatment for his afterlife.

8 When was the terracotta army discovered? 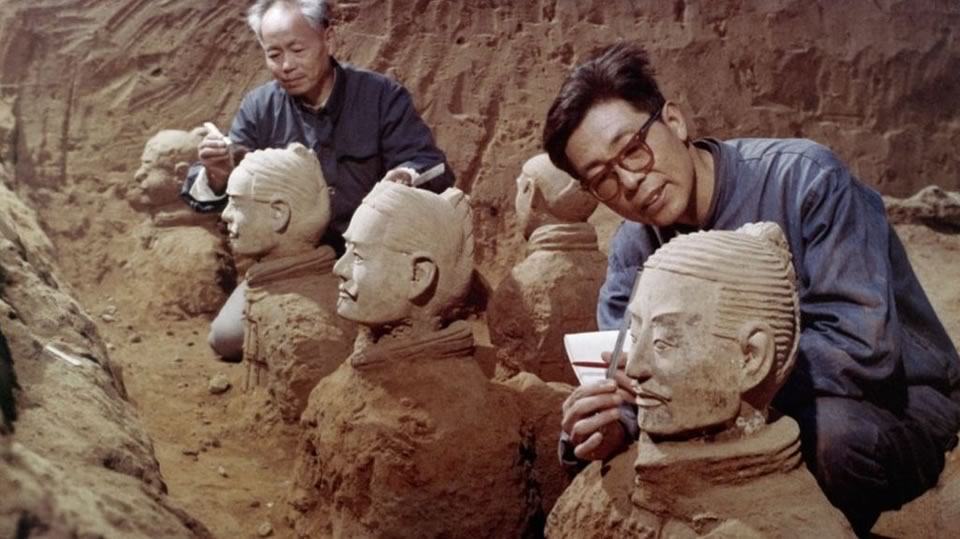 It was discovered by farmers digging a well in 1974, over 2,000 years after it was covered over during the burial of Emperor Qin. The army was located about a mile from the tomb of the emperor.

Because they were coated with a thin layer of chromium that protected them for thousands of years.

10 Most of the statues were found broken

Just imagine hundreds of the many pieces which archeologists have been carefully putting back together for many years.

11 Terracotta is a common type of hard-baked clay

Once the soldiers were shaped with wet clay, they would have been allowed to dry and then baked in a very hot oven called a kiln so the clay would harden.

12 Many who tried to find the terracotta army were killed

No doubt many knew of the treasures that lay inside, but none succeeded in plundering it; this was because a sophisticated system of booby-traps was thought to be in operation – which people still believe is true today.